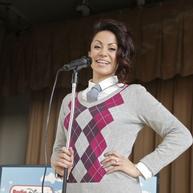 sponsor a performance for a school in need

A thirteen-year veteran of Children's Entertainment, Genevieve Goings starred on the popular Disney Junior show "Choo Choo Soul," and is one of the most recognizable voices in Children's Entertainment. 2X GRAMMY Nominated Goings has also written over 100 songs for the musical curriculum  for Disney English, and most recently produced 25 new songs for the Disney Junior Nursery Rhyme Series!

Children's TV Star, GENEVIEVE Goings SHARES HER NEW EDUCATIONAL MUSIC, AND HER STORY OF THE PATH TO SUCCESS!

what is The Show Exactly?